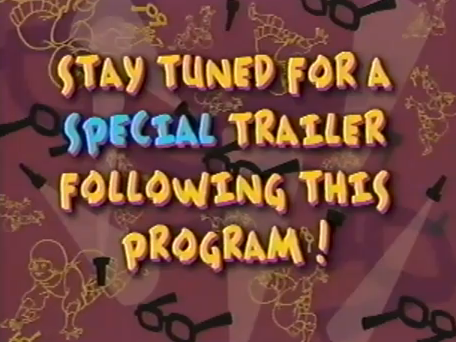 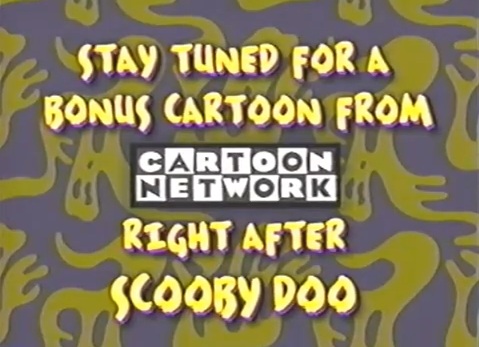 Bumper: On a cordovan background with glasses, flashlights, and yellow outline sketches of Velma looking for her glasses from Scooby-Doo, we see the orange text "STAY TUNED FOR A SPECIAL TRAILER FOLLOWING THIS PROGRAM!" with "SPECIAL" in blue, and a shadow effect applied to the text. This bumper was primarily used on Scooby-Doo on Zombie Island.

Variant: On some Scooby-Doo tapes, this has a dark-purple-ish blue background with green spooky ghosts. The text is yellow instead of orange and reads "STAY TUNED FOR A BONUS CARTOON FROM (Cartoon Network Logo) RIGHT AFTER SCOOBY DOO"

Music/Sounds: None, except for an announcer saying the text, the announcer seems to be Grant Goodeve. However, the variant has a different announcer saying "Check Out a Bonus Cartoon from Cartoon Network Coming Up, Right After Scooby-Doo."

Availability: The cordovan version is only seen on the VHS release of Scooby Doo on Zombie Island, while the other variant appeared on some tapes of Scooby-Doo from the period. 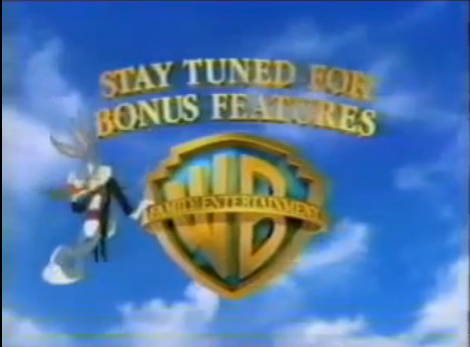 Bumper: It's essentially the same as the early-mid 2000s Warner Home Video Feature Presentation bumper of the era, but the gold text "STAY TUNED FOR BONUS FEATURES" is in "FEATURE PRESENTATION"s spot, arched above the Warner Bros. Family Entertainment logo.

Music/Sounds: Same as the Feature Presentation bumper of the era, except there's an announcer who says "Stay tuned after the movie for special bonus features!". He is almost finished when Bugs Bunny starts doing his business (which is doing his pose and eating his carrot).

Availability: Uncommon. The 2002 VHS of Scooby-Doo was the only tape to use this bumper. 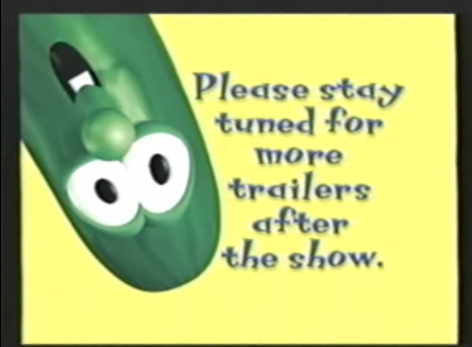 Bumper: On a yellow background, we see Larry the Cucumber staring at us and smiling upside-down. Next to him is the blue text "Please stay tuned for more trailers after the show" in what appears to be Big Idea's version of the Times New Roman font.

FX/SFX: Just the simple fade-in and fade-out.
Music/Sounds: None.
Availability: Rare for the most part, but it was only seen on the 1999 Lyrick Studios releases of the VeggieTales episodes Very Silly Songs! and Josh & The Big Wall!. Some other VeggieTales tapes use [If they had any] the Lyrick Studios bumper (described below) instead. This was only used for a year, before being replaced by the next bumpers described below.
Editor's Note: None. 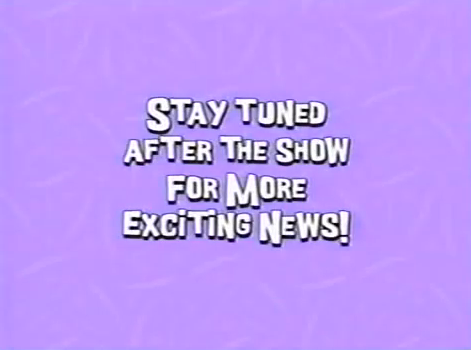 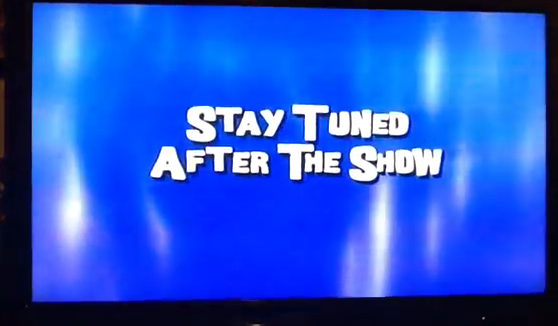 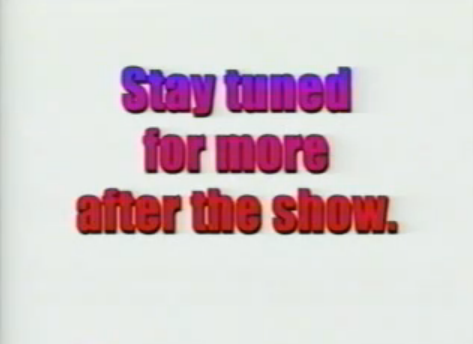 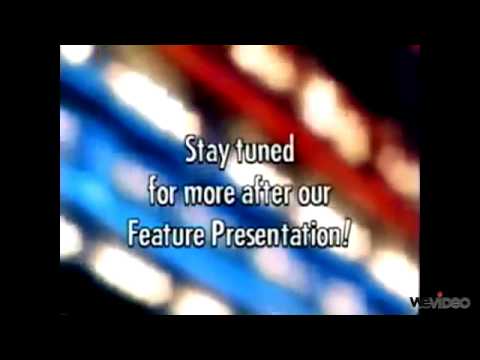 Bumper: On a plain white background, we see the red text "Stay tuned for more after the show." in what appears to be a bolded Arial Narrow.

Variants: Depending on the variant:
FX/SFX: Just the simple fade-in and fade-out.
Music/Sounds: Simply a man announcing "Stay Tuned For More After The Show". On the Las Vegas variant, it's the first fourteen notes of the Erie Canal song from Veggietales: The Wonderful World of Autotainment, with the male Big Idea Productions announcer saying the text, except for the word "Presentation".
Availability: Common. The variants are only seen on Distinct tapes, but the normal version is on some VeggieTales and Larry-Boy! The Cartoon Adventures tapes. The Las Vegas variant is rare, as it is seen on only 2 VHS's and 1 DVD. 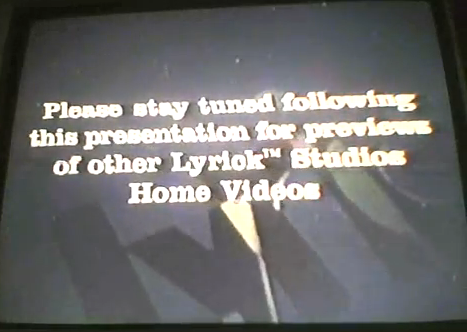 Bumper: We see the white text "Please stay tuned following this presentation for previews of other Lyrick Studios Home Videos" (with the trademark symbol in front of the word "Lyrick" in a small font) on a blue starry night background which starts with ripples, then the 1998 Lyrick Studios logo (minus the trademark symbol and the line with "STUDIOS" underneath it) zooming in towards the viewer at a 45 degree angle, moving slightly to the right.

FX/SFX: The rippling, and the 1998 Lyrick Studios logo zooming in towards the viewer.

Music/Sounds: The last three notes of the 1998 Lyrick Studios theme with a male announcer saying the text.
Music/Sounds Variant:On the 1998 VHS of Shelly Duvall's Mother Goose: Rock 'N' Rhyme, there is no voiceover.

Bumper: On the background of the Wishbone intro, Wishbone is seen looking at the viewer at the bottom left corner of the screen. Above him is the black text "Please stay tuned following this presentation for previews of other Lyrick Home Videos", which is near the top of the screen and centered.

Trivia: This is based on the show's custom "Viewers Like You" bumper.

FX/SFX: Wishbone looking at the viewer, and the animation in the background.

Music/Sounds: Wishbone saying "HELLOOO!", and then the on-screen text.

Availability: Uncommon. It can be seen only on Wishbone's Dog Days of the West.

Bumper: On a sky blue background with confetti falling, we see the gold text "Please stay tuned for more important messages and previews at the end of this video!", which moves back and forth.

FX/SFX: The confetti falling, the text moving back and forth.

Music/Sounds: The music from the first Lyrick Studios logo, with an announcer saying the text.

Availability: Seen on Be My Valentine, Love, Barney and The Wiggles: Dance Partyon VHS

HiT Entertainment:
Bumper: Inside a frame on a white background with color shapes doodling themselves/appearing and those same shapes disappearing appears the blue text "Please Stay Tuned After the Feature Presentation for Previews of Other HIT Entertainment Videos.".

FX/SFX: The shapes drawing themselves/appearing and disappearing.
Music/Sounds: Basically a little percussion piece, with a female announcer saying the text.
Availability: Ultra rare. So far, it is known to appear on the 2004 VHS of Barney's Musical Scrapbook.
Editor's Note: None. 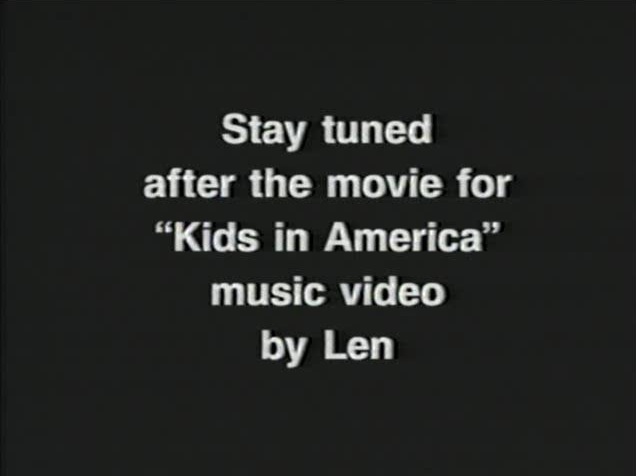 Bumper: On a black background, we see the text "Stay tuned after the feature for "Kids in America" music video by Len", in an Arial font.

Availability: Seen on the VHS release of Digimon: The Movie.